Most people who have never set behind the wheel look at the drivers license coming through the finish line on their journey to becoming a driver. Only when they actually buy a car and start rolling around they see they have merely made the first step.

The second part of this journey represents plunging yourself into the world of mechanics and learn how to recognize the failures, leverage the car’s weaknesses, know what needs to be fixed immediately and preferably learn to do it yourself.

Unfortunately, the list of things you will need to handle is far from short.

That brings us to idler pulley – one of the common banes of inexperienced novices but seasoned drivers as well. So, let us see how you can recognize this problem, how long can you drive with a bad idler pulley, and what to do when the trouble arises.

What is an idler pulley anyway? 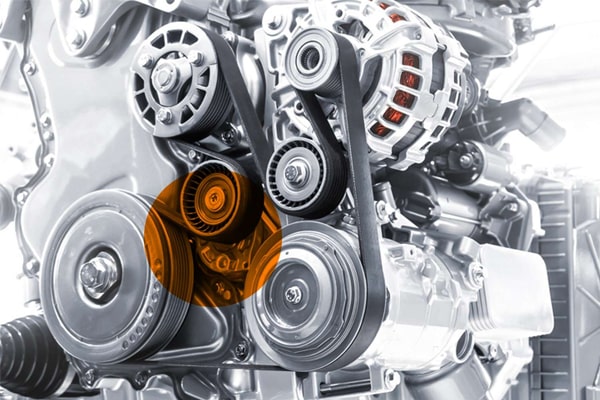 Yeah, the world of car mechanics can be intimidating for newcomers. So, we will break this down for you in a bit.

In essence, pulleys are devices used to direct applied force in a rotational system of motion. In this case, pulleys are used to provide the tension to the belt system and guide the engine drive belt. This way, pulleys regulate the belts that are used to produce the movement in numerous car components like steering-pump, alternator, air-conditioner compressor, etc.

Therefore, an idler pulley would be the pulley that regulates the motion of the idler-wheel – an engine component that transmits rotation from one shaft to another (you really don’t want to let these parts clamp against each other directly).

It consists of a component called a sheave and sits right between supports and holds the belts that run over the roller.

How long do idler pulleys last? 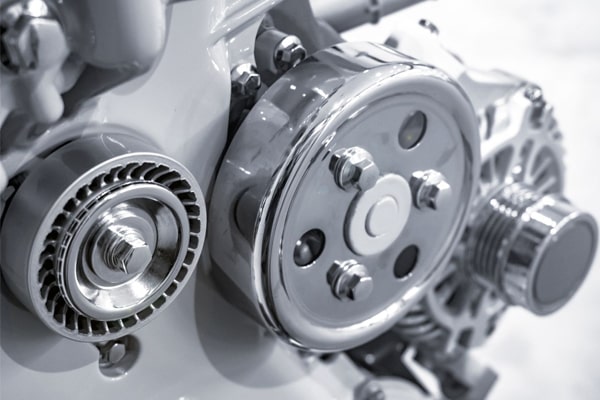 Now that we’ve moved these basics off the table let us move to some more concrete stuff like, for instance, how long these components last under normal circumstances.

Since they are constantly exposed to attrition, you can probably guess that idler pulleys are also very also susceptible to wear as time goes by. The time you get before they eventually fail and break down sits somewhere between 50,000 and 100,000 miles.

These are pretty wide margins, but much like with any other component their life spans will depend on your driving skills and maintenance habits. In this case, you also need to take into account that idler pulleys won’t immediately break to pieces but gradually lose performance as they wear out.

The signs that the idler pulleys wearing out

So, as I just have mentioned above, the period in which the belt and idler pulley wear each out to bits is very long which is good since that is the whole point of belts and pulleys. If you let mechanical parts interact directly they would degrade much faster and fail in a much more spectacular manner.

As a result, you have plenty of time to notice the problem and assess how long you can drive with a bad pulley before you finally drive your car to a mechanic.

Here, we are going to cover three signs that it is probably the time you start putting some money on the side.

When the engine is running both idler pulleys and belts are gradually taking hits. Over time their surface deteriorates, and they are slowly wrapping and bending, all until they are finally unable to do what they were designed to in the first place – run smoothly without hiccups.

Because of this two things can happen. First, the pulley can get stuck and interrupt the motion of the belt. Second, the belt may fall out of place and rub against the surface of the pulley. In either of these cases, the bad pulley will produce a loud squealing noise that is hard to miss.

You may also be interested to read on  How to Make Tonneau Cover Look New Again? Color & Shine Are Back!

The other sounds that can come out due to bad pulley are loud clattering and rumbling.

The other giveaway (that is a result of the very same things we have mentioned above) is the visual condition of the pulley. Namely, the damaged pulley will lose the smoothness of the surface, develop cracks and start breaking apart one bit at a time.

These problems may seem menial enough but they start a chain reaction that eventually causes the engine to stall and overheat so you take into account these symptoms as well (although engine overheating points to numerous other problems as well).

Since they are designed to keep the shafts moving, belts should exactly be able to pop out of the pulley. Of course, it is entirely possible this can happen due to some unexpected reason but that shouldn’t happen often.

If you notice that the belts are moving from their pulley bearing, rubbing against the surface, and producing weird noises the chances are that the pulley is damaged and needs to be replaced.

How Long You Are Safe To Drive If The Idler Pulley Is Failing?

Now that we know the symptoms let us see just how long you can drive your car with a bad idler pulley.

This is a tricky question since we are talking about a very long period of time and a margin of nearly 50,000 miles. One thing is clear, though. If the pulley sustains 100% damage the belts won’t be able to move and the car will simply stop or won’t be able to start, so there’s that.

But, what about that gray area between you notice the first sign of attrition and the point when you absolutely need to drive your car to a mechanic?

You may also be interested to read on  How to Choose the Best Truck Bed Tonneau Cover for your Truck?

Well, the general recommendations are that you don’t wait too long and replace the broken parts if not immediately then as soon as possible.

You see some components like clutch degrade at a more predictable pace and don’t cause problems that bring the vehicle to a complete halt. Having to release the clutch pedal a bit more before the engine catches up is certainly annoying but it doesn’t present an immediate danger.

Idler pulleys are a completely different story. In some cases, you will be able to safely drive for tens of thousands of miles before you notice any drops in performance. But, it takes only one slip of the belt for the engine to lose momentum and for you to lose control over the vehicle.

So, extreme caution is more than proscribed.

If we are to single out one sign that you should absolutely stop kidding around and replace the worn-out parts, we would say that would be the loud squealing noise coming under the hood. Sporadic noises are something every experienced driver is used to. But, if you constantly hear the belts yelling for help be kind and take your car to a mechanic.

The idler pulleys may not be the most well-known car components or the most common cause of good old driver headaches. But, they are essential for seamless engine performance, and if one of them fails the vehicle will simply stop working.

This means the devil is truly in detail and you should leave nothing to chance. Look for the signs of attrition we gave you act as soon as possible. If you are not in a position to repair your car immediately take the squealing noise under the hood as a definitive sign that you should stop driving around and replace the broken pulley.